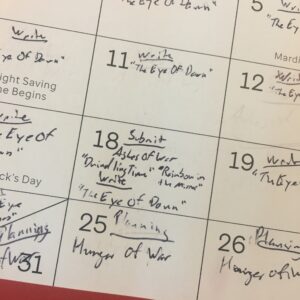 Since 2018, I've kept a calendar for my daily writing activities. One of the first things I do each day is to mark down what I did the previous day. It makes for an easy way to mark progress and be thankful for even small portions of progress.

December 30, 2019 was one of those days. Not only did I have to take on my regular job, I had to fight off a nasty head cold.

November 6? I was burned out and depressed. I missed two days the weekend before since I was at World Fantasy Con.

In total, I had seven of these stagnant days in 2019. One each in January, April, August, and December. Three as mentioned in November. I could berate myself and say, "That's too many." That's like saying I'm lazy 1.9% of the time.

That's also like saying I make a point to work on my goals 98.1% of the time.

Hopefully I'll make something of that sooner than later.

Until then, I'm thinking of adding a time listing to the 2020 calendar. We'll see how that goes.