When October comes each year, people like to embrace the coming of Autumn by hanging pictures of ghosts, monsters, ghouls, and goblins. Horror movies rise from every corner, be it new releases or ascending from the grave of videotape bins.

I keep wondering, what is it that draws us toward the dark side? Are we trying to explain away a personal psychosis? Or is it trying to make sense of some perceived horror that surrounds us? 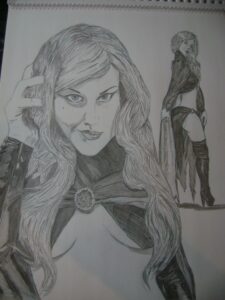 I ask myself these things as I write. There are so many times when my characters exhibit the greatest cruelties of mankind.

In the last month alone, I have written torture, brainwashing, a variety of enslavement, and a touch of murder and combat. Yet most people say Len Berry is a nice guy. If that's true, why am I writing this dark crap? My childhood wasn't abusive, I wasn't abandoned, I didn't tear the limbs off of small animals. I'm as protective of spiders and snakes as I am defensive of red pandas and puppies.

So why do I keep diving into darkness? Why does anyone?

One of the more vile villains in the history of the X-Men is Madelyne Pryor, the Goblyn Queen. It's not because she "dresses" so scantily; newer designs actually give her more clothing. It's because she threw away her veneer of being the nice girl in every sense. This is a woman who went from being the sweet lady Cyclops married to wanting to ritually sacrifice her own infant son.

Turn on the news and you'll find protests over Jokers real and fictional. When we look at Star Wars, we cheer for the likes of Darth Vader and Boba Fett as much as we hope for General Leia or Luke Skywalker.

After far too many hours of thinking about it, I have an answer. It's an answer that will work for me, but it might not work for everyone.

I go to the dark places with my art so I won't go there in real life.

Does that answer work for anyone else? You'll have to let me know.