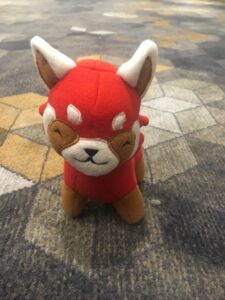 This is my mascot, Akito the Red Panda.

Want proof? Here are the bio screenshots for my account and Akito's: 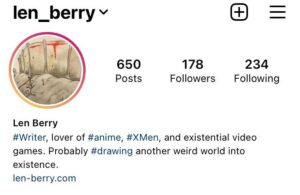 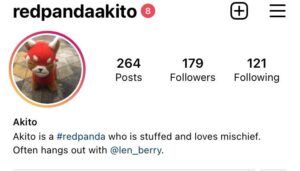 Let's break down what's going on here. Using these bios, I can see that Akito is only one follower ahead of me. I follow twice as many accounts and have made 2.5 times as many posts. Akito also has a link to my bio, since he's a good mascot.

One thing these pictures only hint about is the number of notifications Akito gets. On average, Akito gets two to six messages, which could be personal messages  or someone tagging the account in an image, post, or story. Akito also manages to get a lot of Activity, since people hit Like or comment on one of his posts. In a given day, Akito has an average of 25 - 50 Activity alerts, usually from followers hitting Like or leaving a comment on the previous day's post. Sometimes a new/potential follower will Like a lot of pictures, maybe leave a comment or two.

When that happens, Akito needs a picture of the big string of Activity notifications left by one account. That picture gets added either as a post or, more frequently, to Akito's Stories with a polite note of thanks, tagging the account who noticed Akito.

We've got lots of friendliness and community building without mentioning what goes into a single post. That's because community is huge for Akito. As a red panda, Akito is great at interacting with other accounts that support red pandas and their ecology. This includes photographers, environmental efforts, and fans of names red pandas in zoos.

Akito's community also includes the Plushie Community. After I saw a friend commenting on Facebook that she loved the post because of the plushie, I started adding the #plushie tags to Akito's posts. Just by doing that, Akito's fame has taken off. There aren't any other accounts that have a red panda that looks like Akito. When I write his posts and comments, I do so in character.

I love climbing trees and pouncing and snacks! Be sure to tell the nice people about the snacks. Apples are the best, but I like cookies and popcorn and crunchy bugs too. Yum!

That's just a sample of the tone that comes with an Akito post or comment. I'll even have Akito comment on my own posts from time to time, just to be silly.

Because it's all about having fun.

On Instagram, that fun focuses on making regular, usually daily, posts. Typically, that means I take a picture of Akito climbing a tree, staring at cars, or trying to steal food. Call it staying in character, call it brand identity and awareness, it comes to the same thing: post consistently.

Given my personality, I know leaving a comment on Instagram is better than just hitting the Like button. Because of that, posts that really jump out at me--like an owl DJ giving piano lessons or a raccoon puppet manically wielding a knife over some watermelon--get a comment from Akito. Some of those posts get shared to Akito's Stories, possibly with an extra header.

That's a lot, I know. Talking about me is a lot easier.

I post things that interest me. That could be drawings, books, a scenic view, a selfie, you get the idea. I don't have quite the account focus that Akito has. While I do add to my Stories at the same rate that Akito does, I don't have a frequent or consistent posting schedule. I might go days or weeks without a personal Instagram post.

I'm sure you've already seen the path I can take to better performance on Instagram. Regular posting is key. Fostering community will help. Making sure I stay in character, even if that's just as Len the Writer will also help.

And he's still beating me.