In this era of COVID-19 and all the trials it presents, one major hurdle for every adult is finding a way to live--and thrive--in the constant worldwide presence of this virus.

That means getting a vaccine, especially since as of this writing, I don't know of a way to keep the kids from getting sick. I've been directly exposed no less than twice in just under a year. I've had to surrender having a regular income and benefits to protect myself from this disease. I've had to hurt myself by telling relatives that I can't attend Christmas gatherings--way too many people in a single room.

Today, I'm biologically closer to staying free of SARS-Cov-2 and all its insidious variants. 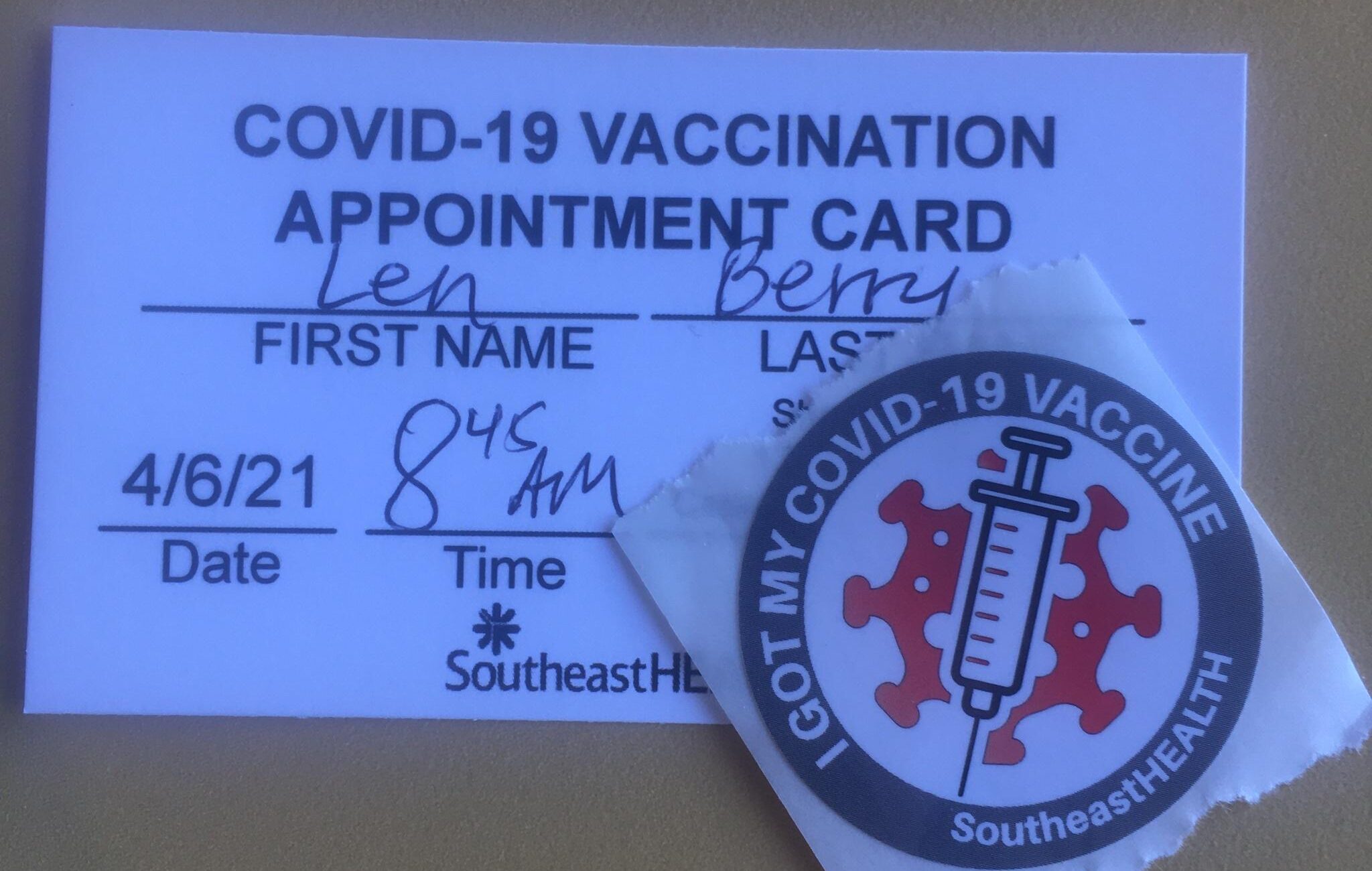 In the interest of posterity and public awareness, let me give you a little insight into my experience.

Online registration. I wouldn't have this vaccine in my system if I hadn't followed the rules of this mass vaccination campaign. My good friend Rocky sent me an email link followed by an immediate text, "Check your email ASAP." Thanks to that tip, I found a listing of times to schedule my appointment.

Scheduling means getting a dose. I was late getting to the door because I misinterpreted the present instructions. I went to the site, convinced myself there wasn't a medical facility there, and drove to the associated hospital.

Good job, Len. The vaccination event was set up in an auditorium to make sure people could be spaced far enough apart.

So I was late by a few minutes. The line was already going out the door, even if a big sign said "Show up no earlier than 5 minutes in advance." Workers called out schedule times. Once I realized that, I went inside, waited for my turn to check in (more line waiting), and said when I was scheduled.

They were still waiting for me.

I got checked in, was given some forms to fill out, and got the famous injection card that scammers love seeing on social media. That's why you don't see that card in this post.

Waiting. Seriously, the wait times aren't that bad. It was around 35F this morning, I was only outside for five minutes. I waited in the indoor line for maybe seven minutes. From the time I was sent to a socially-distant table to fill out the one sheet of paperwork, I only had time to read one page of a book before I was called to the next, most important part of the event.

Lines were frighteningly long. They flowed at amazing speed.

Injection! The vaccinator had remarkable good humor. He'd been going for over half an hour, but I'm sure he'd performed at least twenty injections in that time. He was fast, he had great bedside manner while being technically proficient. I regret that I couldn't get his name, but he was the perfect person to do this kind of work.

The shot itself was a Pfizer vaccine. It was a low dose, maybe 15ml of solution(?). It went into my deltoid, a thick shoulder muscle. That injection may have been the least painful needle I've ever had puncture my skin. Some bug bites hurt more than my vaccine.

Once the injection passed out of the needle an into my system, the vaccinator said a line that I heard him repeat a few times before I left. "You are vaccinated."

There's a degree of relief that came with that statement. I don't have the words yet. Maybe I will in time. For now, on with the events.

A different kind of waiting. Some people have adverse effects to these vaccines. It's a different branch of symptoms depending upon manufacturer as much as on the person getting vaccinated. That means having a huge collection of socially-distant chairs set aside while the staff processes the paperwork.

Shots in arms are more important than leaving people in line.

That meant more time to read. I got through another four pages while taking in some of the sights and sounds. I spent my morning in the heart of a unified front to fight a public health crisis. Given the somehow-politically motivated mindset of Missouri's state government, I was expecting to get a shot somewhere around November.

Instead, it's halfway through March and I'm halfway to total vaccination.

The current end, but not the total ending. My name was called again and I was given an appointment card and a proof of vaccination sticker--that's the picture above. I wasn't led to any particular door, so it was a scramble to get out. That's my one complaint about the whole process, I was sent looking for any way to get out of the building, which meant leaving in front of the long line trying to enter the building.

As I've set up this post, I've found an email listing my pre-listed appointment for my second dose. I picked when I'd get this first dose; I had no say in when I'd get the second. No complaint there. I'm just letting you know the shape of things.

There's a little soreness where I was injected, but that comes and goes. I was told it would be more painful than a flu shot, but that's not true in my case.

I'm healthy, intact, enjoying the sunlight, and doing my part to make our society safer.